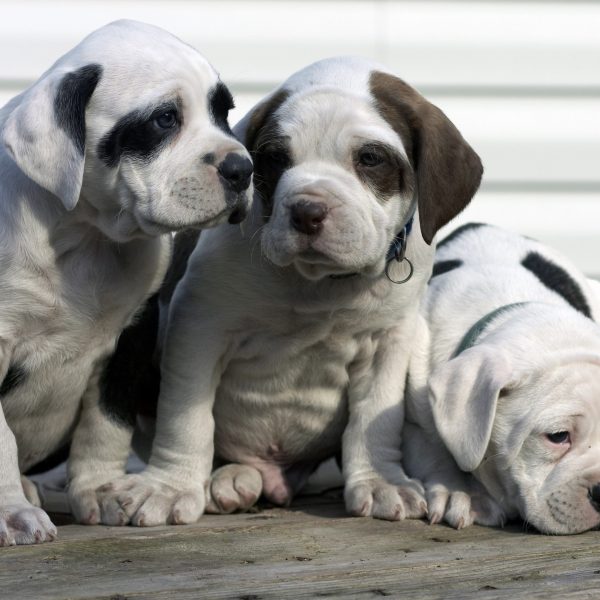 The American Bulldog is a large, lovable dog breed that bonds closely with its families. They tend to be big sweethearts that are known for their gentle nature and fun-loving personality. Here are a few more facts about American Bulldogs:

When the descendants of the American Bulldog came to the North American continent, they originated in what would become the Southern United States where they were developed over time into the American Bulldog we know today. They were commonly used as all-around working dogs on farms and ranches throughout the south.

In addition to being livestock guardians and farm protectors, these dogs also worked as stock dogs, catch dogs, herding dogs, and more. Whatever the farmer or rancher needed to do on the farm, the American Bulldog was there to help.

They were also prized in the past for their ability to help protect the farm from a feral pig population that was growing out of control at the time. Today, they can still be found working on the farm, but they also can be found serving as police and military dogs as well as just being beloved family pets.

American Bulldogs may make great farm guardians and protectors, but they also make fantastic family pets! They tend to have a sweet disposition, a gentle nature, and a fun, playful personality.

They tend to love children and also get along well with other animals in the house. The American Bulldog also bonds closely with their families. In fact, they absolutely adore them! Plus, they thrive on attention and affection from their families, so they will enjoy showering you with plenty of cuddles. Just be ready for a dog that thinks they are a lap dog regardless of their size!

These dogs can have a high prey drive. If other animals in the household are smaller, you will want to spend some extra time on introduction and socialization to make sure your American Bulldog puppy recognizes them as part of the family and not as potential prey that needs to be chased. Because this dog has a protective instinct, they can be aloof and initially wary when it comes to strangers and strange dogs. But, here too, early socialization can be a big help.

These dogs are high-energy. They are also athletic and versatile, so they will often enjoy doing a variety of different activities. Your American Bulldog will likely just enjoy spending time with you doing something active, so don’t be afraid to try a bunch of different activities with them once puppies finish growing and developing.

Just make sure you wait until their bones have finished developing before you start any high-impact, rigorous exercise. For a large dog like the American Bulldog, this could be anywhere between 16-24 months of age. Doing too much, too soon with your puppy can cause joint issues later in life, so make sure you run any new exercise programs by your vet.

If you’re in the clear for all activities, you can try teaching your dog to play frisbee, going hiking, going swimming, and more. You can even try training them for dog sports like weight pulling, obedience, agility, and more. American Bulldogs love having a job to do and learning something new, so they’ll probably enjoy training for dog sports or just trying a new activity with you!

4. They Can Be a Good Fit for First-Time Dog Owners

American Bulldogs may be high-energy working dogs, but they are also highly trainable. They are eager to please and intelligent, so they tend to pick up on things quickly. They are also sensitive dogs that bond closely with their owners, so they are often very in tune with them. They respond best to consistent and positive training methods focused on rewards and praise.

They can have a stubborn streak, which is common with many bulldog breeds. And, they do need a job to do. So, a first-time owner may want to be prepared to enroll in puppy training classes in case the stubborn streak or working dog energy proves difficult for them to handle on their own. Puppy training classes can be a good idea regardless as they often offer great opportunities to socialize a puppy.

After World War II, this breed nearly went extinct. John D. Johnson, a returning war veteran, Alan Scott, and other breeders came together to re-establish the American Bulldog breed. Given that there were many expectations for the bulldog, a few different lines emerged.

Two of these lines became the most popular, the Johnson line and the Scott line. The Johnson line is bulkier and has a heavier bone structure, embodying the “bully” look. Scott’s line is leaner and excels at performance events. Today, the American Bulldog is a mix of these two lines.

While most breeds have very specific, strict standards, the American Bulldog standards are a little bit more flexible in some areas. The ears can either drop, stand semi-erect, or be cropped. Tails can either be docked or left at their natural length. They can have any eye color but brown is typically preferred.

Is an American Bulldog Puppy Right for You?

These are just a few facts about American Bulldogs. The lovable American Bulldog is a great fit for owners and families that can give them the attention, affection, and exercise they need to be happy and healthy. If you think this could be the right dog breed for you, learn more about them and check out the available American Bulldog puppies! You could end up finding your next best friend! 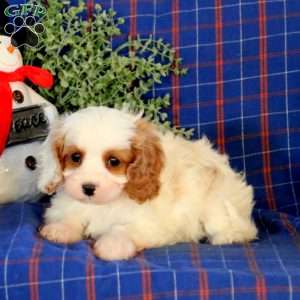