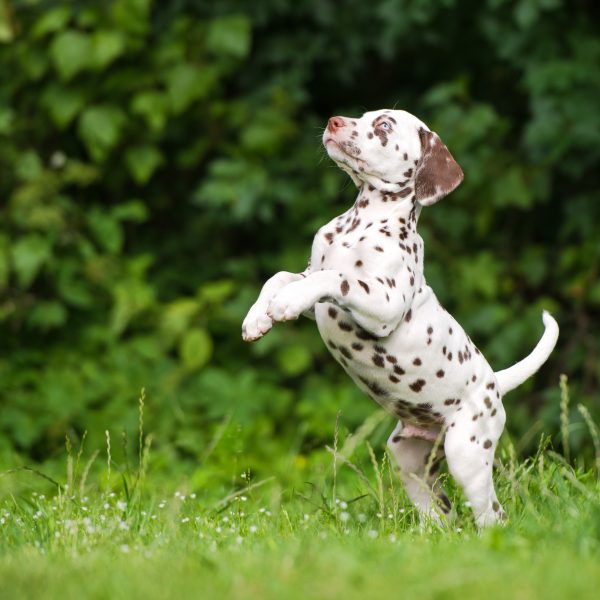 The Dalmatian is known for their spotted coat. These energetic dogs are devoted and loyal to their families. Here are a few more facts about Dalmatians:

1. They Were Bred to Guard and Run With Horses

Dalmatians have one of the most iconic coats known to man, as portrayed in films such as 101 Dalmatians. Their original purpose was to guard horses and the coaches they drew, and with that comes the strength, and prestige that the role entailed. This disposition led to a moderately standoffish, yet proud breed.

While they can be wary of people they don’t know, this lends to them being vigilant protectors. And, like with many protective dogs, comes the traits of intelligence, fidelity, and affection. However, it is our responsibility as trainers to get them to realize their full potential, and that potential starts young.

2. Dalmatian Puppies Are Born Without Spots

When born, Dalmatians have a thick, white coat of fur. After about two weeks, the skin pigmentation that gives them their iconic spots will start peaking through the fur.

From there on out, whatever hair grows over the pigmented skin will be dark. Eventually, there won’t be any random white hairs on the spots. Just give it time and enjoy watching your Dalmatian puppy grow into their iconic spots.

3. The Dalmatian Can Be Sensitive

While not the most sensitive breed, Dalmatians do have a reputation for being a bit touchy, especially as puppies. In order to mitigate this, it’s recommended to expose them to as many unusual, but positive experiences as possible. This early socialization will help train them to accept unfamiliar situations as something exciting instead of something to fear.

This gives them the confidence to handle new situations in the future. Make sure to socialize them with other dogs as soon as possible, both young and old. As with any dog breed, it’s important to continue to socialize your dog throughout their life.

Because they are sensitive, they are also sensitive to the tone of voice. Although positive, reward-based training is the best approach for all dogs, it is even more important with Dalmatians.

4. They Are High-Energy Dogs

Classically bred as a working dog that had to keep up with horse-drawn carriages, the need for physical fitness is ingrained into a Dalmatian’s core being. Owners don’t have to have them race horses (even though it couldn’t hurt), but instead can use more traditional forms of exercise such as hikes, bikes, and playing catch.

Getting a dog ball launcher is a solid way to exercise a Dal, as it allows for greater distance on the ball and longer runs that will tire them out faster. However, make sure not to stretch it too much with puppies. Their bones don’t fully develop until around two years of age and doing too much before puppies finish growing can damage their developing bones and joints.

Take heed – not giving Dalmatians the exercise they need can result in one mischievous pooch, so make sure to work them out as often as possible.

Dalmatians are stereotypically smart dogs. This means that from the onset, they need to be trained with a set of rules for them to follow, or else they can get mischievous. You can harness this intelligence by playing agility games that train both mind and body.

Obedience training to master basic commands, such as teaching them how to sit, stay, come, and ignore human food, are all ways to stimulate, and reward, this intelligence.

The most common problem in Dalmatians is deafness. 8% of Dalmatian puppies are born totally deaf, and 22% are born deaf in one ear. It’s only recently that breeders started recognizing this, so for hundreds of years, congenital deafness was allowed to continue throughout breeding lines.

Now, only bilateral hearing dogs are bred, but it’s going to take a while before this problem disappears from Dalmatians entirely. Interestingly enough, this condition is found in many albino and pigment-spotted animals, not just Dalmatians. This is due to a lack of melanocytes, a result of having a lack of melanin, the chemical that gives skin color, in their inner ears.

Therefore, if a Dalmatian is unresponsive, chances are that it’s not dumb or rebellious – it could be hard of hearing, which is something owners should try to recognize as soon as possible. Reputable breeders will screen their dogs and to avoid passing on issues like this. So, if you are considering a Dal puppy, talk to the breeder about the parents and ask about any hearing tests that have been done.

A Dalmatian puppy with unilateral or bilateral deafness can have a long and happy life with you. You will just need to take some precautions and add in some new training techniques to make sure you and your Dal puppy stay safe and can communicate.

These are just a few facts about Dalmatians. If you think this could be the right dog breed for you, learn more ae about them and then take a look at the available Dalmatian puppies. You could end up finding your new best friend! 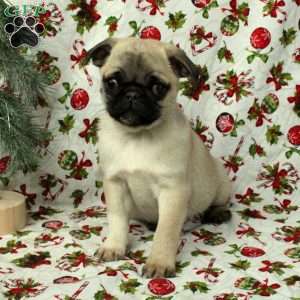