The Iditarod is an intense test of strength, longevity, and willpower for the dogs pulling the sled and the sled driver who is navigating through the frozen tundra. The race includes miles of ice and snow, days that average below freezing temperatures, and dangerous feats and obstacles along the way. Dogs and humans alike spend much of their lifetimes training for this race in hope they will place and go down in history as a winner in the perilous race.

How it all started

Dog sledding had been used for hundreds of years by the native tribes in Alaska and continued to be the main transportation of goods and people up until the end of WW2. During wartime dog sleds and mushers were often employed in the U.S. army to patrol the frozen wilderness of Alaska to ensure no enemy would infiltrate the country under a blanket of snow.

During the 60s, however, dog sledding became less popular after the invention of snowmobiles. With that much of the skill and tradition of dog sledding seem lost. Some, however, wanted to preserve the traditions by creating a race on the historic Iditarod trail. To preserve the institution of dog sledding the Iditarod race began as a way of commemorating the anniversary of Alaska becoming a U.S. territory. At first it was not as popular as it is now. Joe Redington and Dorothy Page began organizing cleaning projects and volunteer work to create a safer trail but could not create enough interest to actually create the race. Thanks to Joe Redington (now known as the father of the race) the first race was held in 1973 on the historic Iditarod trail and continues to this day.

When the race began many mushers and their teams depended on roadhouses between villages to warm up and escape the cold during the night. The lanterns put outside of the roadhouses would often be a guiding light for the teams through the dark and snow. Now they are still seen as beacons of light and warmth and have become synonymous with the race.

Now there are some moderations and sophistications to make the trek a little less grueling but it still, definitely, one of the great races of the world. 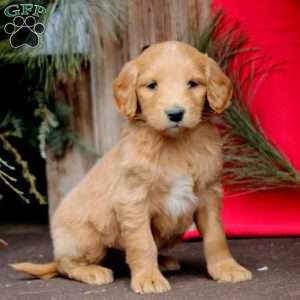 $650.00 Goldendoodle-Miniature Puppy Our Puppy of the Day!