It’s no mystery that dogs’ noses are more acute than humans’. That’s why you see them in airports, protecting our skies, and famously busting up criminal enterprises in return for a modest snack. However, dogs don’t just smell contraband; they smell a wide variety of things that humans simply cannot. Here are some things dogs can smell that humans can’t:

1. Dogs May be Able to Tell if Someone’s Pregnant

How many times have you heard about a dog sensing someone was pregnant before they knew or announce it to others? Our hounds can sense our shifting hormones and may be able to sense them even more in pregnant women. Even though science has only started to find evidence of this, dog parents will often tell you that dogs can sense pregnancy.

2. They Can Smell People

Humans may be able to smell other people if they are particularly pungent, but a dog goes so much further than that. Your dog can recognize your smell and differentiate it from those of others. Your canine’s superb nostrils are able to pick you out in the middle of a crowd with no problem.

We may be able to follow visible footprints and other highly visible clues, but dogs can find scents in the air and even follow footprints that may be hidden by smell alone. This is due to dogs having between 100 million and 300 million scent receptors, compared to a human’s paltry 6-7 million.

There is substantial evidence that dogs can also smell cancer. A 2019 BioScentDx study found dogs can detect cancer samples more than 97% of the time. Early detection of cancer usually offers the best chance of treating it.

A highly sensitive, accurate test for early cancer detection could save thousands of lives, and possibly change the treatment of the disease. Perhaps our dogs hold the secret to developing such a test after all?

4. They Can Smell Blood Sugar Spikes

Since glucose levels affect the way our breath smells, diabetics with severe conditions are finding new help in avoiding major blood sugar emergencies thanks to dogs that have been trained to detect dropping blood sugar levels.

Many service dogs trained to work with someone who has diabetes will be able to alert to changes in blood sugar and give their owners an early warning of upcoming issues. This allows someone with diabetes to better manage their condition and prevent issues that come with glucose spikes.

While it may be possible to counterfeit something visually, when it comes down to its distinct chemical makeup, few things replicate themselves faithfully to the original. Often, dogs can smell the difference between an original and a fake.

That’s why agencies like Interpol and other law enforcement agencies use dogs to detect counterfeit items. In addition to contraband, scent dogs have been used to detect everything from fake money to phony DVDs and more.

6. They Can Sense a Change in Your Mood. And, it Affects Theirs.

Although dog owners often know that their dogs can sense their emotions, what many people don’t know is that the reason is that emotions have a pheromone that dogs can detect. Dogs can smell this, but humans cannot. So, what marker gives dogs the ability to sense our emotions? Hormones.

Hormones can change when people experience changes in their emotions. Emotions produce stress hormones like cortisol or adrenaline, or a comforting hormone like oxytocin. Dogs can detect these hormonal changes in breath and in sweat. These indicators paired with your behavior can give dogs a heads up that something is happening and will react accordingly.

7. Dogs May be Able to Smell COVID

The human body emits different odors from illnesses, such as Covid-19, in our sweat and saliva, which can be detected by dogs. Airports in the UAE have already started working with coronavirus-sniffing dogs. Additionally, there are several different studies ongoing that involve dogs being trained to detect Covid-19.

These are just some of the things dogs can smell that humans can’t. It’s safe to say that since they have exponentially more receptors than we do, we have yet to truly understand or tap into the full potential of the canine nose. 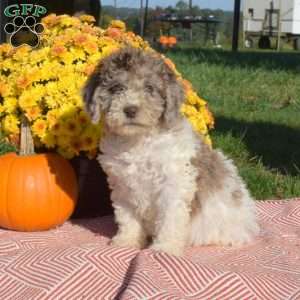 $450.00 Labradoodle-Miniature Puppy Our Puppy of the Day!